Gamblers lined up outside casinos in Arizona and Oklahoma to play on the slot machines as Las Vegas remains closed.

Mangers at the casinos said their machines have been placed at least six feet apart and limited seating will be allowed at tables for games like blackjack.

Meanwhile, in Oklahoma, casinos in the central and western parts of the state say they have also redesigned with social distancing restrictions and sanitation safeguards in place to protect against a resurgence of the coronavirus. 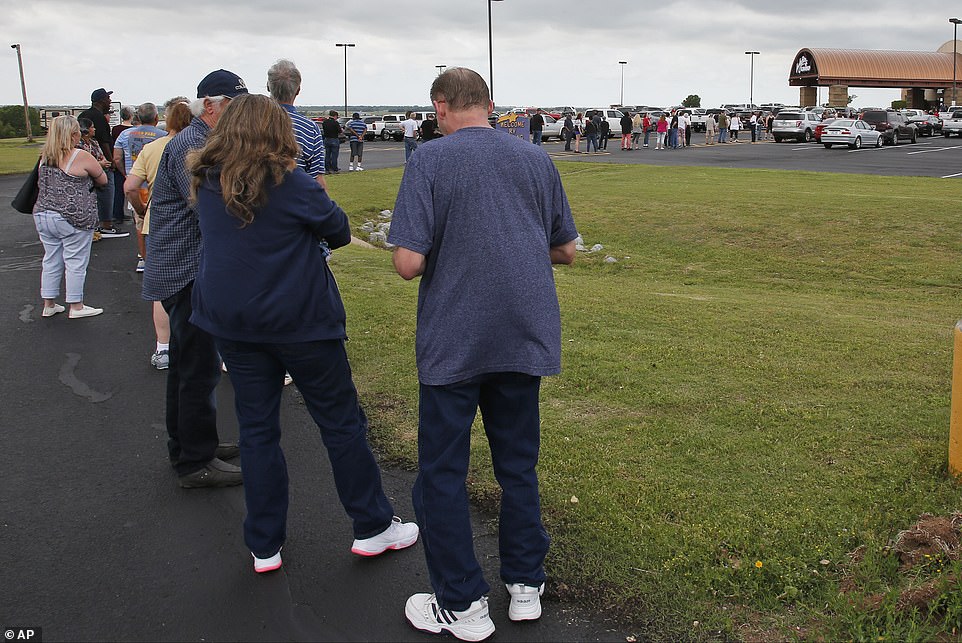 Dozens of gamblers lined up outside casinos in Arizona and Oklahoma as they reopened this week. Pictured: People lined up all the way to the parking lot at the Lucky Star Casino in Concho, Oklahoma, May 15 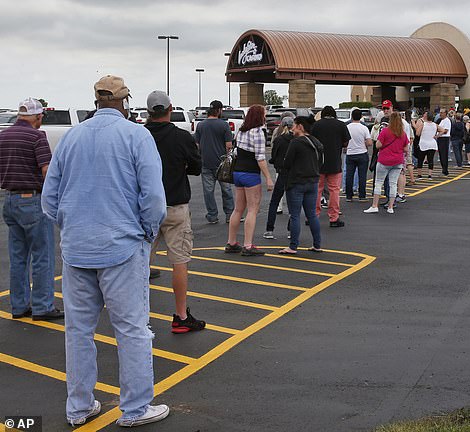 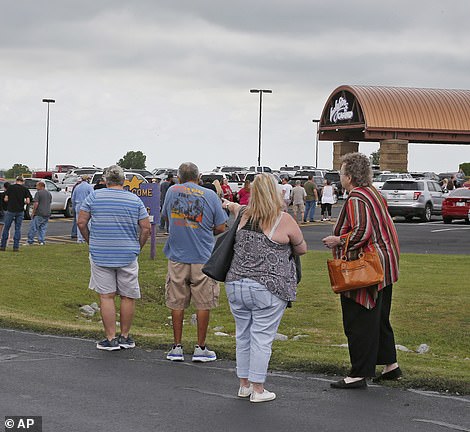 At Lucky Star Casino in Oklahoma, guests and employees received temperatures checks either manually, via thermal imaging camera, or both. Additionally, plexiglass shields have installed. Pictured: Customers lined up outside of Lucky Star Casino, May 15 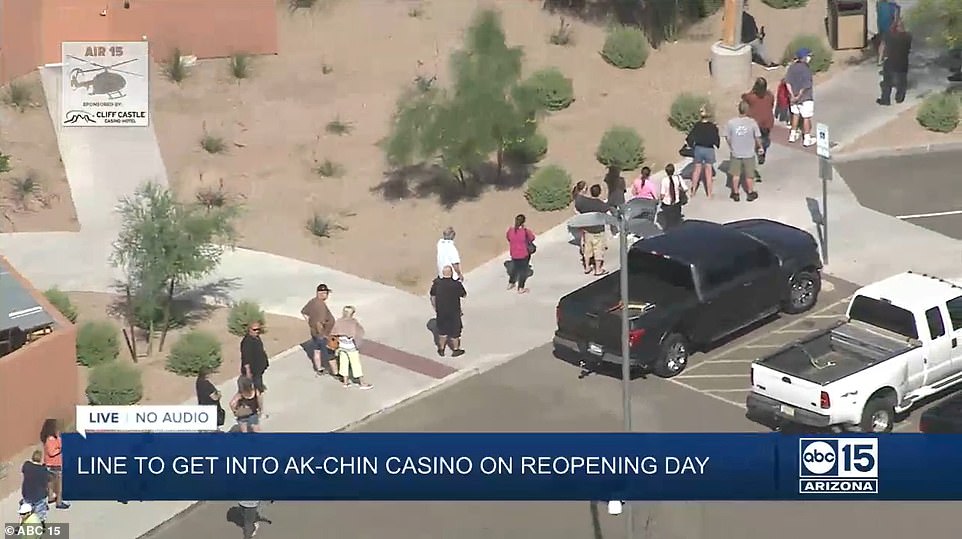 A line of people stretched to the parking lot at Arizona’s Ak-Chin Hotel and Casino (pictured), which has been redesigned social distancing restrictions and sanitation safeguards 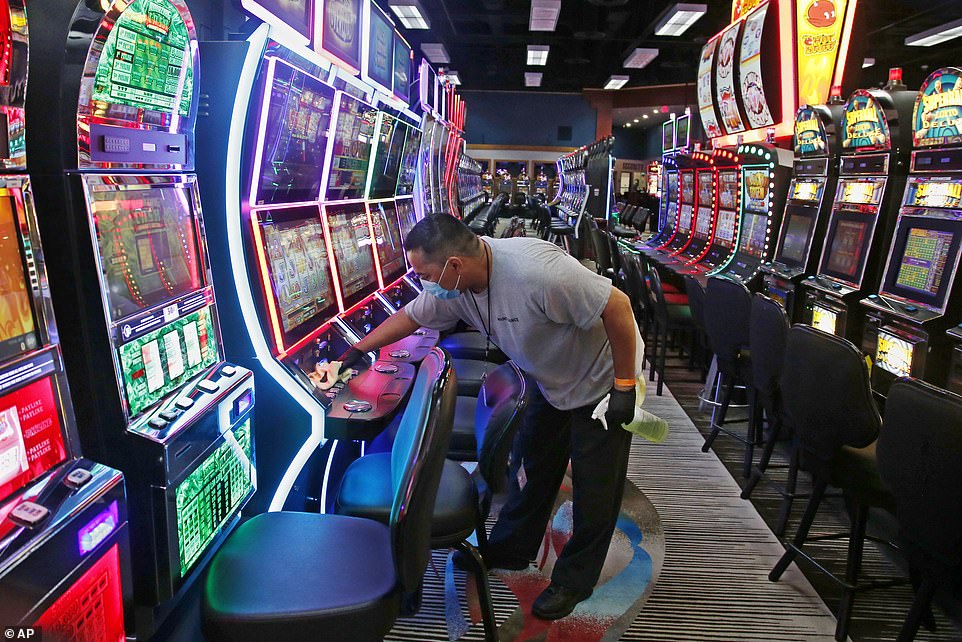 After a customer is done playing at a slot machine at Lucky Star, an employee will receive an alert to clean the machine. Pictured: Tobias Morales disinfects gaming machines in preparation for the reopening of Lucky Star Casino, May 15

In Arizona, the Ak-Chin Tribal Council earlier approved the reopening of its casino, with slot machine banks arranged to allow for social distancing and limited seating at blackjack tables. Poker, keno and bingo games were not resuming yet.

‘We look forward to welcoming back our casino guests,’ Robert Livingston, the casino’s general manager, said in a statement.

Footage taken from above by an ABC15 news helicopter on Friday morning showed several hundred people lining up outside the Ak-Chin casino.

The customers, mostly middle aged and elderly, including a few on motorized scooters, appeared to be respecting social distance with large spaces between each other. Few were wearing masks.

Along with social distancing and sanitizing measures, the casino that belongs to the Fort McDowell Yavapai Nation will conduct temperature checks using handheld scanners and thermal cameras.

Anyone with a reading over 100F will be denied entry.

And Gila River Hotels & Casinos said casinos will have new non-smoking sections on slot machine floors that observe social distancing and hard plastic shields had been installed in key areas including the cashier cage and some dining venues.

Hand sanitizing stations were being prepared at entrances and social distancing will be encouraged throughout. 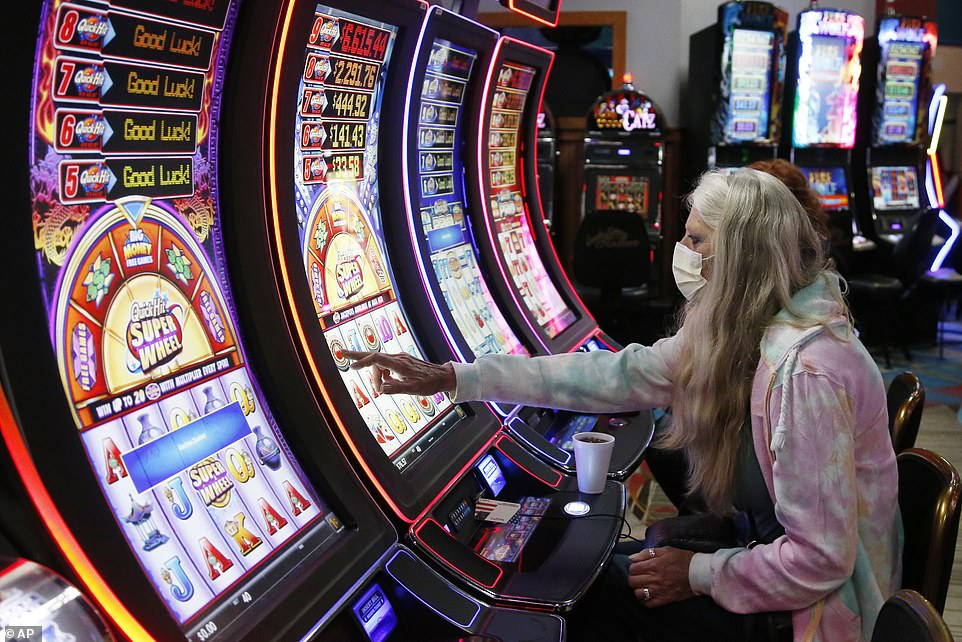 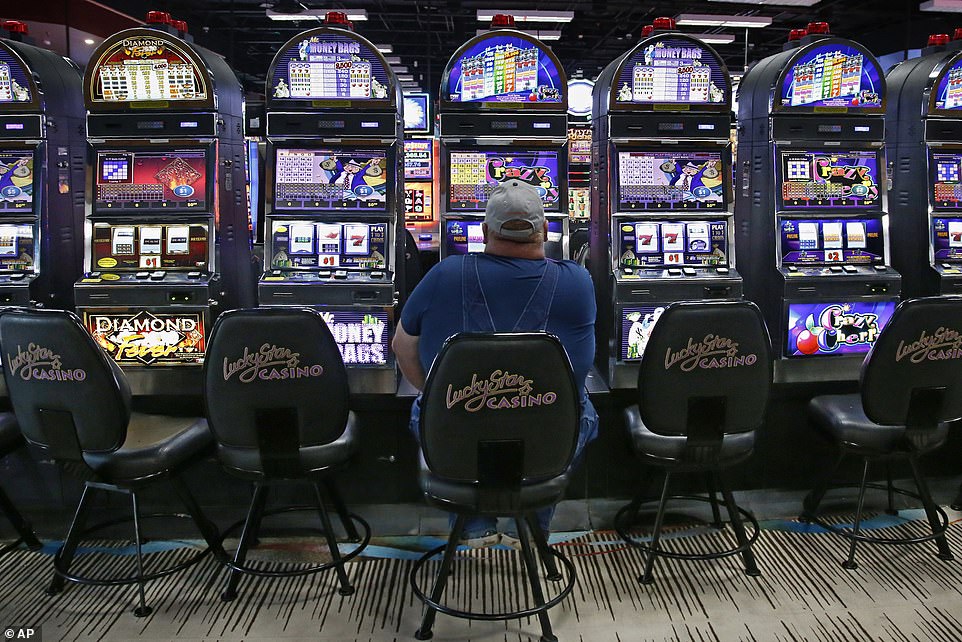 Some casinos, which are usually 24-hour operations, now have limited hours. Pictured: A man plays on a gaming machine at Lucky Star Casino, May 15 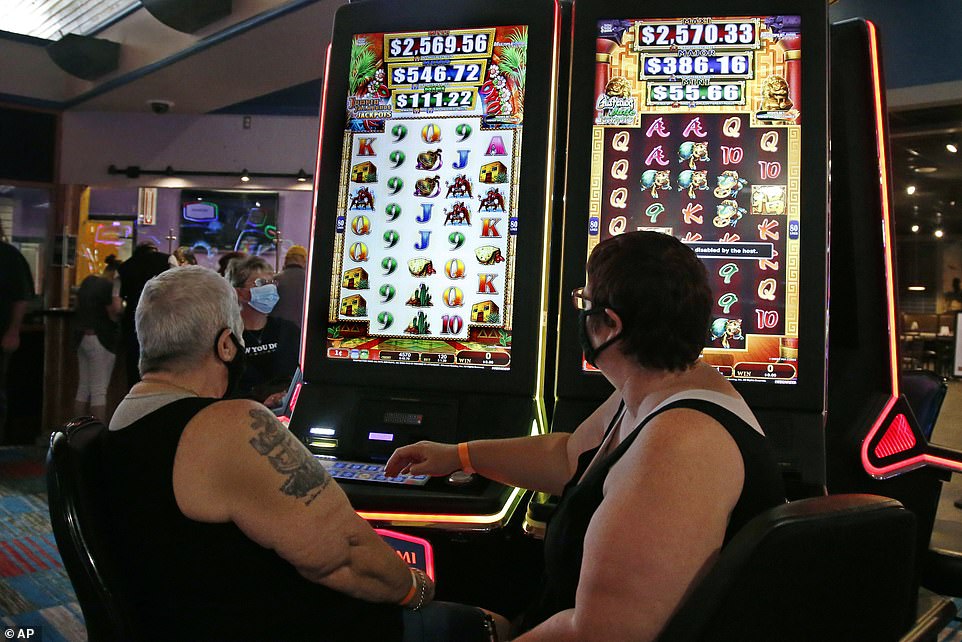 Nationwide, some 500 Native American casinos have shut down. Pictured: Gladys Whittington (left) and Sandy Christian (right) play at a gaming machine at Lucky Star Casino, May 15

Casino staff members in Oklahoma were also eager to get back to work.

A Las Vegas casino laid off ‘hundreds of employees’ through a recorded voicemail on Tuesday, after the staff had already been furloughed.

A number of employees at Rampart Casino in Summerlin allegedly received a recording from the property’s vice president Michelle Bacigalupi in which they were informed they were permanently laid off, according to the Las Vegas Review Journal.

A separate termination letter dated May 8 and branded with the Rampart and JW Marriot logo was acquired by VitalVegas.com and is said to have been sent to other employees using the same wording as the recorded message.

The Rampart casino is located within the JW Marriott Las Vegas resort.

The exact number of employees laid off is uncertain, but it is reported by VitalVegas that only 200 of the 1,700 staff at the property will remain.

It is also unclear if the staff involved worked solely at the casino or if they were linked to the JW Marriott. The hotel’s website states that while perceived as one entity, it is not associated with the Rampart Casino but the letter holds its branding.

DailyMail.com reached out to both the Rampart Casino and and Marriott International for comment.

‘It just seemed like the right time to do it. We decided to do what we call a soft opening without a lot of fanfare.’

The reopened casino in Norman limited the number of patrons to between 200 and 225, while a sister facility in Shawnee allowed about 100 inside.

Caruso said both are about one-third of their usual capacity and no table games are open.

Those inside must wear masks and maintain six feet of distance from others, but couples are allowed to sit together. Temperature checks are being performed at the door.

‘Every guest that has come in the facility has been very appreciative. They understand and when we tell them to put a mask on they put their mask on,’ Caruso said.

Additionally, the usually 24-hour casino has limited operating hours, and is open from 10am to 10pm.

‘Most of our casinos are located in western Oklahoma,’ Lucky Star Casinos COO Andy Rednose told the station. ‘A lot of our counties have very few if no cases in the counties.’

Guests and employees received temperatures checks either manually, via thermal imaging camera, or both.

To maintain social distancing at slot machines, whenever a customer sits down at a machine, two on either side will disable, according to KFOR.

When the guest leaves, staff will receive an alert to clean it before it is used by someone else.

‘Health professionals advise that recent measures enacted to help mitigate the spread of the virus are beginning to work because of widespread participation,’ Anoatubby said in a statement. 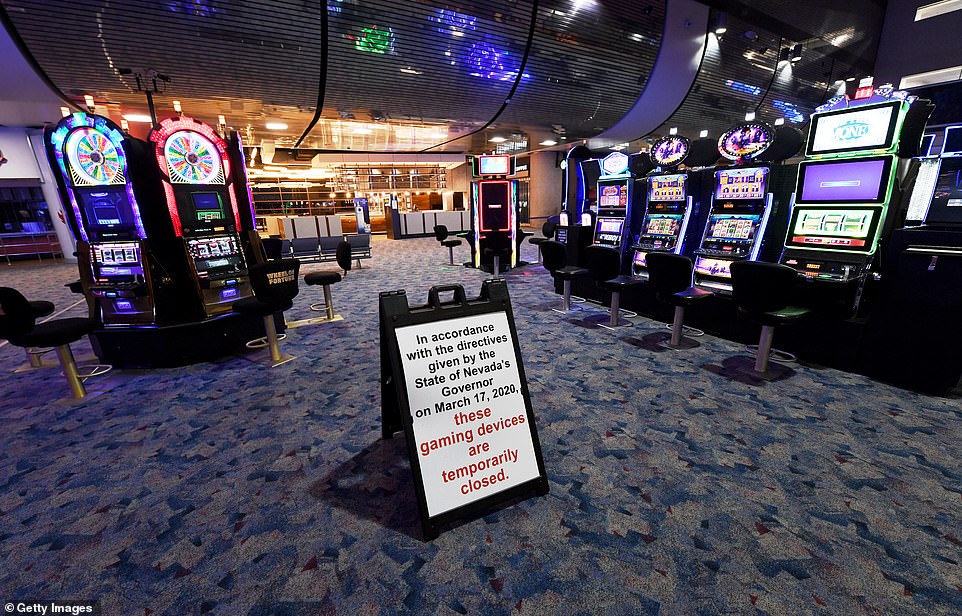 Casinos also remain closed in Las Vegas and the rest of Nevada, which is very dependent on gambling tourism. Pictured: A sign displays a message about the closure of a gaming area with slot machines at McCarran International Airport in Las Vegas, May 14 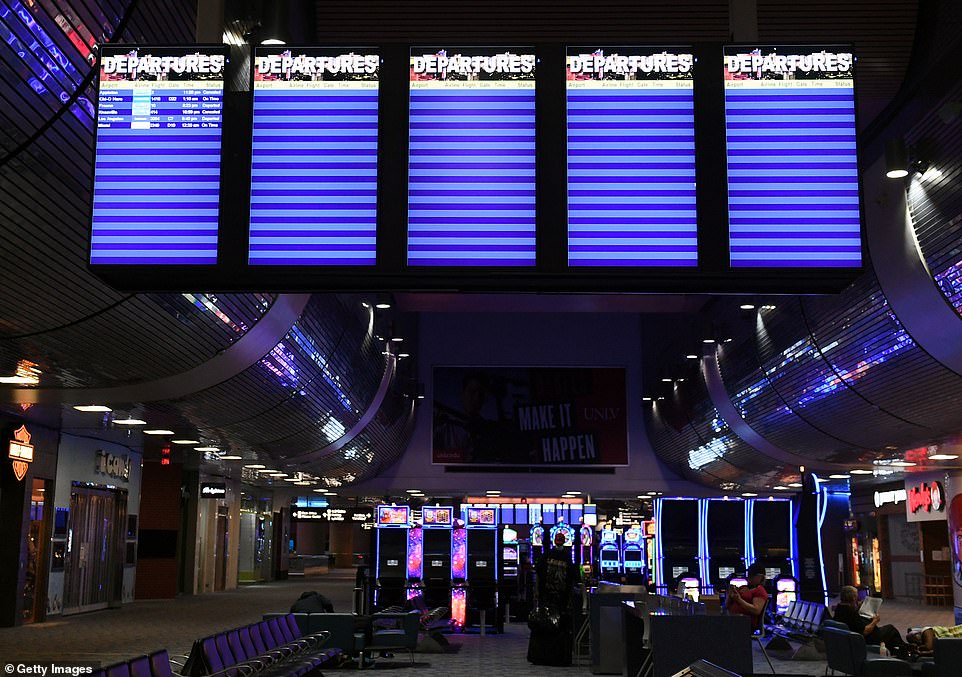 But Democratic Gov Steve Sisolak has said gambling venues will not be among businesses restarting activities during the first phase of Nevada’s reopening. Pictured: Flight board monitors above a closed gaming area at McCarran International Airport

‘Local health benchmarks do not suggest that now is the time to reopen … the Muscogee (Creek) Nation casinos,’ Principal Chief David Hill said in a statement.

However, the Choctaw Nation of announced tentative plans to re-open casinos and resorts on June 1.

Nationwide, some 500 Native American casinos have shut down.

Casinos also remain closed in Las Vegas and the rest of Nevada, where the economy is heavily dependent on gambling and tourism in general.

Nevada gambling officials last week approved rules to limit customers, keep gamblers spaced apart from each other and disinfect dice and cards when the state’s casinos do reopen.

But Democratic Gov Steve Sisolak has said gambling venues will not be among businesses restarting activities during the first phase of Nevada’s reopening.

WAYS TO PLAY Pools Bet on anything from football games to your favorite show. Make picks from a list of options. The more you’re correct, the more points you get. The perfect transition from daily fantasy. Oh, and many are free. Promotions Keep your eyes open for special promotions offered on the reg. Odds boosts, […]

Oklahoma has a huge legal land based casino industry featuring over 100 casinos. 1992 saw the first style of casino, which included electronic games and bingo. It was not until 2004 that the casinos were allowed to provide table games with live dealers. This was when the boom of casinos began. It did not take […]

Each state has the power to legalize sports betting due to the Supreme Court overturning the Professional and Amateur Sports Protection Act of 1992. This decision was made in May of 2018. Since then New Jersey, Pennsylvania, Delaware, West Virginia, Rhode Island, Mississippi, and New Mexico have all legalized sports betting to some extent. Another […]