Dating back to 2010, Oklahoma State has posted six double-digit win seasons under head coach Mike Gundy. Since both standout running back Chuba Hubbard and electric wideout Tylan Wallace opted to return to Oklahoma State instead of jumping to the NFL, the Cowboys were thought of as an early contender for a Big 12 Championship just two weeks ago in many respected betting circles.

However, as Pokes Report Robert Allen recently highlighted, “Oklahoma State and Mike Gundy will need to block out noise to heal.”

The issue of Gundy wearing the OAN T-shirt could potentially follow the Pokes for the entire 2020 season. Allen put it well when he stated, “the program will need to do it from within, working together as players and coaches. The best way is to stay together and work on it everyday and ignore what is said outside the program.”

According to PointsBet sportsbook, Oklahoma State’s season win total projection stands at 8.5 wins, moderately juiced at odds of -135 to the under.

The Cowboys start the season with a game that should give Spencer Sanders a perfect opportunity to shake off any rust from a limited offseason due to the pandemic shutdown.

Oklahoma State faces off against Pac-12 opponent Oregon State as 17.5-point favorites in the season-opener. In Week 5, the experts in Vegas envision potential trouble looming in their first Big 12 test of 2020, posting the Cowboys as 1-point road underdogs against TCU.

The Cowboys face a difficult stretch in their final six games of the season commencing with a showdown on the road against powerful in-state rival Oklahoma. Oddsmakers currently have Oklahoma State listed as 9-point underdogs going into Norman. Oklahoma State will be pumped to take out the Sooners, but it should be noted that Oklahoma has won five straight meetings.

Coming off back-to-back tilts with Texas Tech and Baylor, Oklahoma State should have an easy time with West Virginia in Week 11. The oddsmakers have the Cowboys listed as 13-point home favorites.

Gundy and the Cowboys face another tough test in their regular-season finale when Texas will head to Stillwater as 1-point road favorites versus Oklahoma State. The sharp money in Las Vegas has backed Sam Ehlinger and the Longhorns in early wagering. 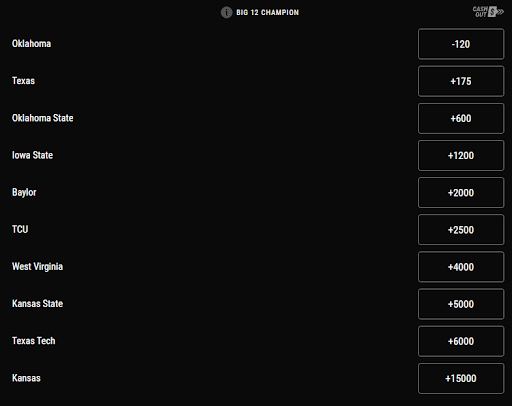 With projections that envision a potential three-loss regular season, the sportsbooks are offering Oklahoma State as the third overall betting choice at 6/1 to emerge as Big 12 Champions for the first time since 2011. All bettors who believe in the Cowboys to win the Big 12 Championship Game who wager $100 would return $600.

As we have previously highlighted here at SI Gambling, Oklahoma State currently has two players listed in the Heisman Trophy odds at William Hill: running back Chuba Hubbard (22/1) and quarterback Spencer Sanders (50/1).

Oklahoma State has had one Heisman Trophy winner in school history: running back Barry Sanders (1988).

Returning to the gridiron is going to be a difficult endeavor for college teams due to the COVID-19 pandemic. However, the Gundy T-shirt distraction could very well linger both on and off-the-field for the 2020 season.

The sharps recognize that Oklahoma State possesses two of the best players in the entire country in Hubbard and Wallace, but they are of the belief they will be unable “to block out the noise” in pivotal games against Oklahoma, TCU and Texas. With a strong potential of no less than a three-loss season, the sharps find value in going under the posted total.

Short Summary: This page looks at the different forms of gambling in the State of Oklahoma, discusses the legality of online gambling and gives a detailed listing of all of the Commercial and Tribal casinos in the state. Oklahoma is one of the more conservative states and there is no exception when it comes to […]

Oklahoma sports betting was technically legalized Tuesday at a handful of Native American casinos operated by two separate tribes, though further operational and possibly legal challenges could delay or derail legal wagering. If regulated betting is allowed to commence, Oklahoma will likely become the 23rd state to either begin taking sports bets or approve the […]